RGB INSTALLED AUDIO, THE RIVER OF LIGHT AND THE BEAR’S WEDDING AT ESTONIAN NATIONAL MUSEUM 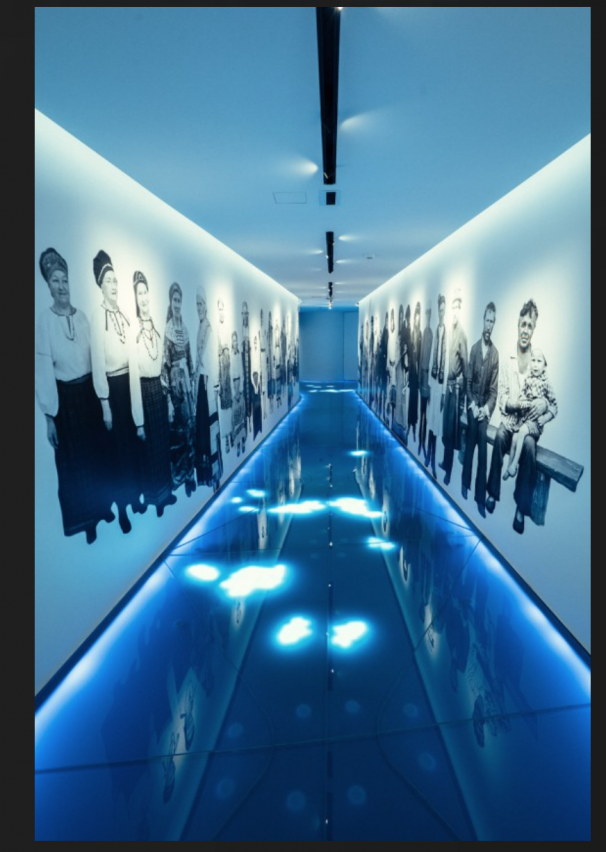 Sound installation for the Finno-Ugric exhibits

One of the central expositions of the new Estonian National Museum building encompasses a sound installation that represents sounds of nature from around the year. The soundscape designer Taavi Tulev created the sound installation for the Finno-Ugric exhibit, which covers nearly 1000 square meters and uses 126 speakers to emit sound from 140 channels. According to Taavi Tulev, the artist who designed the sound installation, the exhibit offers visitors a unique spatial sound experience that is unlike any other previously experienced in Estonia and other neighbouring countries. “At this exhibit, the sound exists in a symbiosis with the rest of the material that can be viewed and experienced – the ambient sound makes everything that is static come alive. The result is that the visitor is transported quite nicely to the time and place that the exhibit portrays. The natural background makes the visitors forget that they are in a museum, amongst old things,” explained Tulev, who also went on to confirm that extra attention was paid to small sound details, which will definitely provide the visitors with surprising moments.

The technical solution for the installation is based on the central QSC Q-Sys Core 1100 device, which controls all of the transmitted sound, plays audio files, receives impulses from the exposition sensors and also communicates with the light management devices. For amplification, we used the QSC CX series models with 8 and 4 channels, which are in a two-way connection with the central Q-Sys control device. To create a general atmosphere, there are a total of 45 QSC AD-Ci52ST speakers integrated into the ceilings. For the exhibit sounds and sound effects, we used the QSC AD series, K Array, Monacori, RSF and Amina speakers, including 39 “invisible” Amina plaster-over speakers.

The River of Light is the central element in the design concept of the Estonian National Museum’s permanent Finno-Ugric exhibition. This motif represents a border between areas that present the main ethnic groups of the exhibit. The river borders and joins, divides and unites, synthesizes. The River of Light works with the system of walkways as a guide, with parts of it branching off into various sections of the exhibit. The overall image of the design solution for the River of Light (system of walkways) was also chosen to be on the central wall of the foyer, displayed as a graphic axis for the tree of languages. The River of Light is made up of glass panels, on which the visitors walk, and LED screens that are installed below them. Animated fish swim along the river of LED screens and they also react to the museum visitors. When a visitor steps on a glass panel, the fish are startled and swim away. When visitors stop and stand on one of the panels, the curious fish soon swim back to them. There are different sized fish in the river and though their graphic animation style is minimalistic, their behaviour is modelled to be as similar to real fish as possible. The sound solution is also part of making the experience more realistic for the visitor, with the river’s sound solution mimicking the movement, splashing and babbling like a real brook.

The multimedia solution includes 57 60x60cm LED panels, sensors and computers for presenting the movement of the animated fish, touch sensitive microphones for further motion detection and 93 metres of LED light strips. The glass floor consists of 120 triple-layered glass details that are all differently shaped. 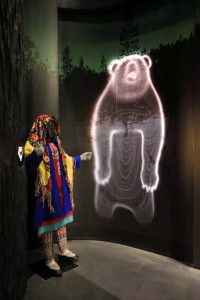 The Bear’s Wedding is an interactive scene that is part of the Finno-Ugric Northern Peoples hall, where the visitor can experience a bear’s emotions.

The bear animation is presented as a graphic solution made up of LED spots, where the bear becomes larger than life. The solution for the concept uses curved LED panels that make up a wall and touch sensitive icons on the trunk of a tree. Sound effects help create the ambiance (there are speakers inside the trees), as do the light effects inside the tree that are shaped like the bear’s paw, and the general lighting for the hall. The visitors can feel what the Bear feels, test the bear’s rage or love. When the Bear is enraged, his paw prints appear on the trees, bear growls are heard as part of the background sound, and the image of a raging bear appears on the LED panels. When the Bear is in a loving mood, the visitors see a visualisation of his heartbeat and hear the sound.

The River of Light is based on the Architectural Concept created by Estonian interior design company JANKEN Wisespace.
Graphic Design Concept and Multimedia were created by Velvet.
Sound design was created by Taavi Tulev. 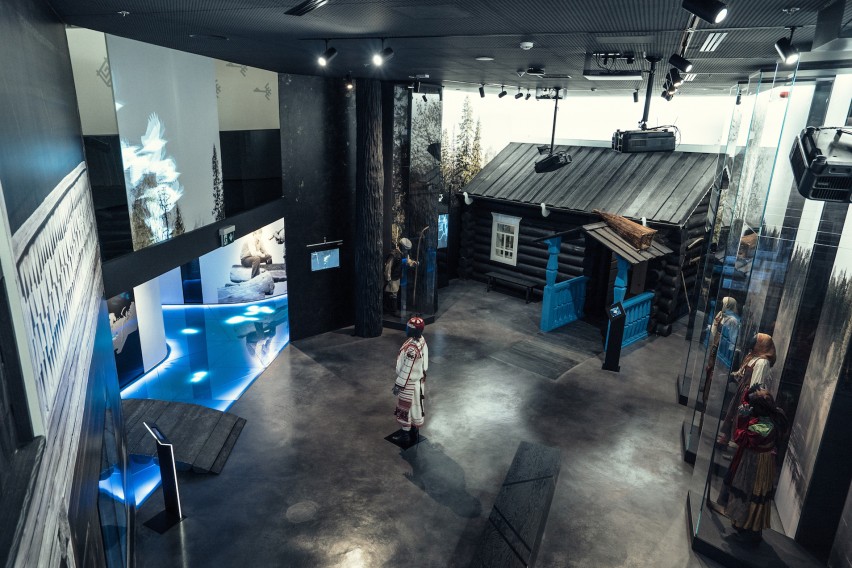